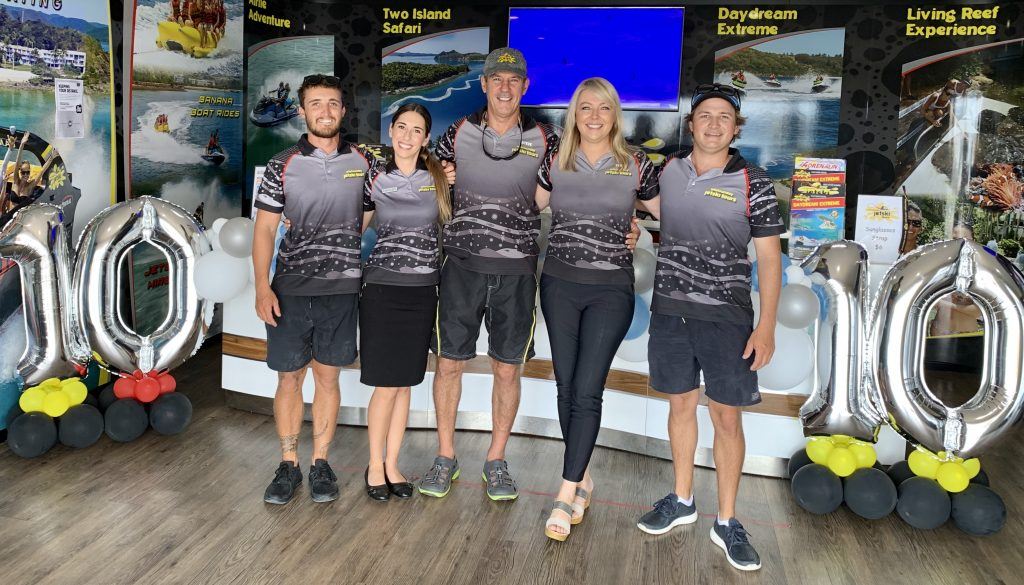 Whitsunday Jetski Tours is owned and operated by Steve and Toni Ward, local Whitsunday residents, with long ties to the tourism industry, having operated commercial watersports in the Whitsundays since 1992, including Daydream Island Watersports, based at Daydream Island.  While based on Daydream Island, they held a long term vision to offer guided jetski tours from Airlie Beach and campaigned to gain permits to operate from the mainland since 2000. Determined to see this vision evolve and with great success, Whitsunday Jetski Tours opened its doors and operated its first tour on 06 August 2010.

“It was a huge gamble to offer something so unique to the region back in the day and it’s since been a big journey, with some bumps along the way, but the highs far outweigh the lows and we are so incredibly proud of what we have created for adventure seekers visiting the Whitsundays,”  said Steve.

Whitsunday Jetski Tours has also won 37 Whitsunday and Queensland Tourism Awards gongs, as well as the Whitsunday Hall Of Fame for Adventure Tourism, and was also awarded the #1 Tourism Experience in Australia and the #5 Top 10 Experience in the South Pacific, being the only Australian company, in the 2019 TripAdvisor Travellers’ Choice Awards.

“We can hold our head proud and reflect on what we have achieved over the years.  Being awarded the number one tourism experience in Australia really cemented that.  We truly believe in our product and that we offer something so uniquely different to any other tour in Australia,” said Steve.

Those few bumps along the way included the ongoing repercussions from Cyclone Debbie, the closures of Daydream Island, monsoonal weather and now COVID-19, however the company’s success is reflected in the hard work and commitment of Steve, Toni and their team of dedicated, long-term staff.

“One of mantras that we live by is that “your vibe attracts your tribe”.  We really are like a family and everyone is so passionately invested in the business that it makes for such a vibrant, happy and respectful workplace.  We really can’t thank our past and current staff enough for everything they have contributed over the years.  We have been very lucky, but as owners, we also like to think we have created a work environment where people really enjoy coming to work each day,” said Toni.

“What is most exciting is that even though times can be challenging, especially given the current situation, we will continue to grow and evolve.  In fact, it has provided us with the opportunity to diversify with two new ventures to be launched and ready to go by the end of the year.  These will be targeted to both existing and new markets and we know there will be a very positive response to what we will be offering,” added Steve.