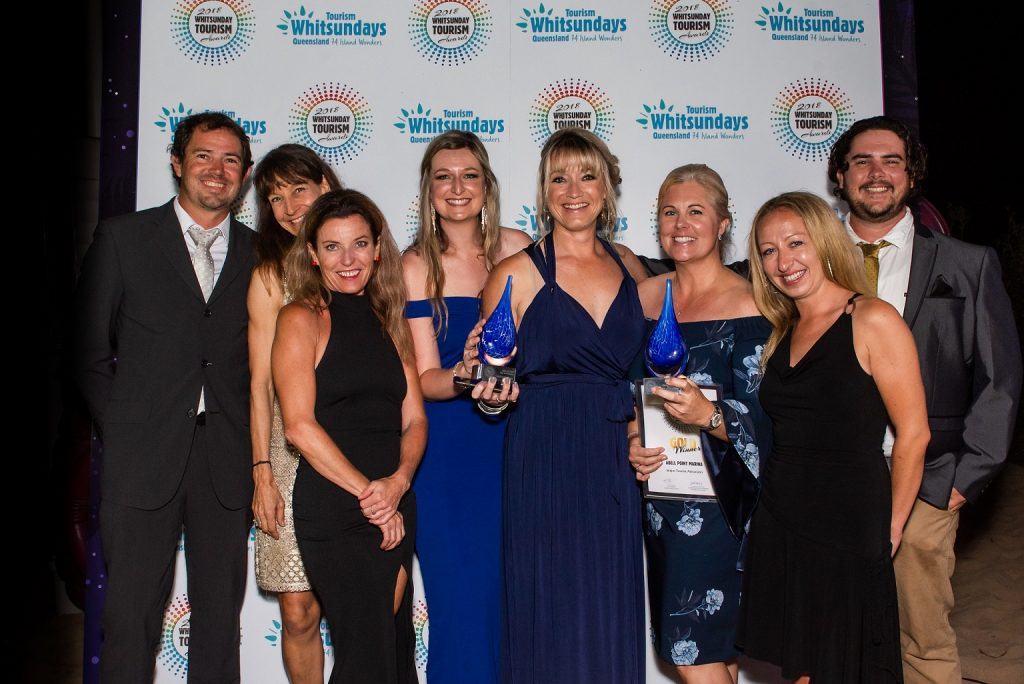 At a black-tie event hosted in the Whitsundays this weekend, Coral Sea Marina Resort were once again named Major Tourist Attraction for the region. The 2018 Whitsunday Tourism Awards was supported by over 370 tourism operators, employees and industry stakeholders gathering to celebrate the achievements of the region’s tourism operators and service providers.

Shining the spotlight on the Whitsunday tourism industry, Tourism Industry Development Minister Kate Jones was in attendance. Ms Jones said in her welcome speech that the Whitsundays was vital to ensuring the growth of the Queensland’s tourism economy.

“I know the judges had a particularly tough time this year judging the overall winners. This is a testament to the quality of tourism offerings we have in the Whitsundays,” she said.

With 2018 being the third consecutive year Coral Sea Marina Resort has won the Major Tourist Attraction category, the marina was inducted into the Hall of Fame. In addition to the marina striking gold, marina-owned restaurant Hemingway’s took our gold for Tourism Restaurant and Catering Services.

Since opening in May 2017, Hemingway’s has developed a strong reputation for innovative food and attentive service in a stunning waterfront setting. Attaining its first Chef Hat (Australian Good Food Guide) in January 2018, Hemingway’s was also a finalist in the Savour Australia Queensland awards in August. The focus now shifts to the 2018 Queensland Tourism Awards on the Gold Coast in November.

Joscelyn O’Keefe, Marketing Manager Coral Sea Marina Resort explains “We are delighted to win Major Tourist Attraction for the third consecutive year. The marina is also home to many of the award-winning operators who were also recognised with awards this year. Red Cat Adventures, Whitsunday Jetski Tours, Cumberland Charter Yachts, Whitsundays Escape, Ocean Rafting, Derwent Hunter and Airlie Beach Day Sailing all received awards and their products all contribute to the vibrant destination marina we are developing at Abell Point. For Hemingway’s to also take out gold, after only one year in the business, was an incredible achievement for our entire team!”

Situated in the north Queensland town of Airlie Beach, Coral Sea Marina Resort is one of the busiest commercial marinas on the east coast of Australia, with 519 wet berths and two waterfront villages that host 21 commercial businesses. Over 80% of marine tourism in the Whitsundays is based at Coral Sea Marina Resort, making the marina the ideal destination to stay, play and explore the natural wonders of Australia.