In response to the Great Barrier Reef Marine Park Authority’s (GBRMPA) announcement this morning around the health of the reef, Tourism Whitsundays CEO Craig Turner said while there are bleaching events happening across the Great Barrier Reef, the effects of bleaching within the Whitsundays were minimal. “We recognise that there are areas of the reef that are experiencing bleaching events at the moment, however, the reef is over 2,300kms long and there are varying degrees of effect,” he said. 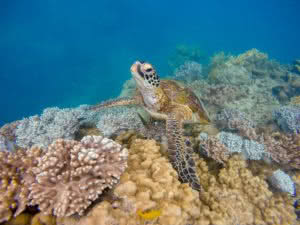 “The Whitsundays is located in the heart of the Great Barrier Reef (GBR), halfway between Brisbane and Cairns, and the reef in the Whitsundays is in good shape – it is still going to provide visitors with an exceptional life-changing experience. “Our industry is continually monitoring the reef to ensure that all efforts to safeguard the GBR are being undertaken. It should be noted however that, as stated in the GBRMPA release, warming temperatures and bleaching events are a global issue and concern, and are not only occurring on the GBR.”

Great Barrier Reef Marine Park Authority Director for Reef Recovery Dr David Wachenfeld says while there was severe bleaching and subsequent loss of coral in the northern reefs the impact of bleaching eases further south, with reefs in the central and southern regions – around Cairns, Townsville and southward – much less affected and now showing signs of recovery.

“For visitors, these surveys show there are still many reefs throughout the Marine Park that have abundant living coral, particularly in popular tourism locations in the central and southern regions, such as the Whitsundays and Cairns,” he said.

“The Great Barrier Reef is still a beautiful, vibrant, diverse and resilient place and I encourage you to come here and see for yourself how wonderful it is.”