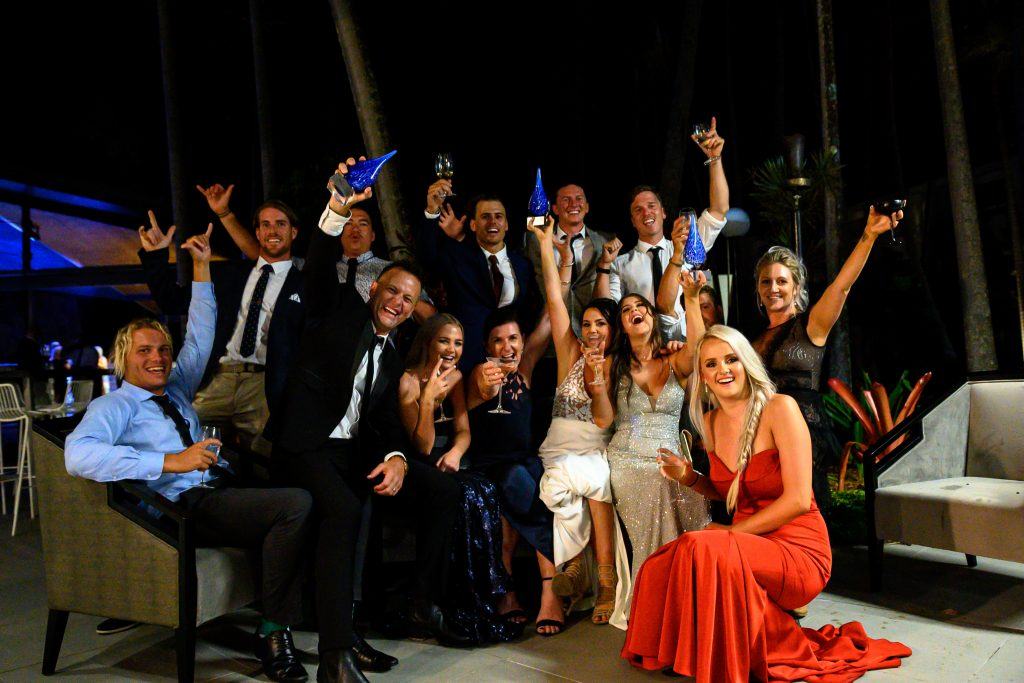 They say all that glitters is not gold, but the team at Red Cat Adventures has more treasure to add to their trophy cabinet following Saturday’s 2019 Whitsunday Tourism Awards.

Already a national tourism award winner, the company took out Gold as the Whitsundays’ Major Tour and Transport Operators, as well as Silver in the Adventure Tourism category.

The Joshuas’ Whitsunday Wedding Campaign, in which Red Cat Adventures and their mainland resort Paradise Cove Whitsundays were major partners, was also awarded the 2019 top gong for Destination Marketing.

Red Cat Adventures owners, Julie and Asher Telford, said winning Gold in the Major Tour and Transport category for a second consecutive year locally, was valuable recognition of their continued growth and investment.

“In the past 12 months we’ve added a fourth vessel to our fleet, with a goal to make it even more fuel efficient through improved design and technology,” Asher said.

“The result, in Thundercat III, is a world-first, that actually took two years to design and build.

“This year we became Climate Action Leaders, which is the highest level of ECO certification you can be awarded in Australia and the only tourism business to be honoured with it in the Whitsundays,” Julie continued.

“We also won the 2019 Australian Enterprise Award for Most Innovative Charter Boat Business – Queensland, and have partnered with non-competing but complementary businesses like Prosail Whitsundays, Whitsunday Jetski Tours and Air Whitsundays.”

Of course, none of these achievements would have been possible without the couple’s 30 staff, for whom they have the highest praise.

“Our staff live and breathe our core values of passion, fun, professionalism, honesty, respect and approachability; they work so hard alongside us and these awards would not be won without every single one of them – they should be very proud,” Julie said.

“Our ‘Red Cat Career Pathway’ encourages our crew to grow with the business and the full management restructure we’ve undertaken this year has had positive and tangible results.”

The Telfords also paid tribute to their suppliers, agents, business mentors, industry peers and all the awards entrants, finalists and winners.

“We’d like to make special mention of our fellow contributors to the Joshuas’ Whitsunday Wedding Campaign – including the previous and new owners of The Wedding Planners Whitsundays,” Julie said.

“Through this campaign collectively we reached over one million people and positioned the Whitsundays as the wedding heart of Australia in the heart of the Great Barrier Reef.”

Last but not least, the couple thanked their customers.

“For everyone who’s ever been on a Red Cat Adventures tour, and for the locals who’ve attended our ‘Sessions in Paradise’ at Paradise Cove Resort, these awards are for you,” Asher said.

Red Cat Adventures offers varying levels of adventure across three different products; from sleeping under the stars on the deck of ‘Tongarra’ to whizzing around the Whitsundays on a high powered ‘Thundercat’, or joining a ‘Ride to Paradise’ and spending the night at the boutique Paradise Cove Resort.

The company will now compete in the same categories at the Queensland Tourism Awards on the Sunshine Coast on November 8.