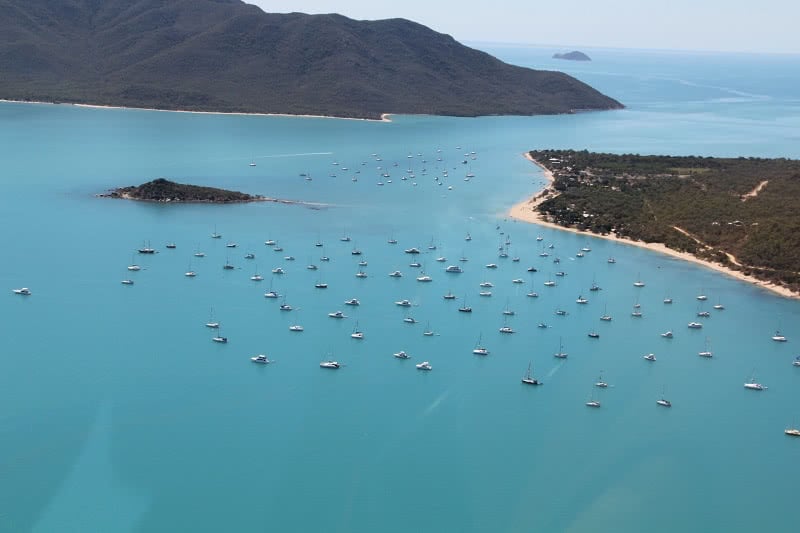 It is that time of year again when the grey nomads of the water sail into the beautiful Whitsundays for the annual Shag Islet Cruising Yacht Club Rendezvous (SICYC).

SICYC was created as a social network for like-minded yachties to get together, share stories and experiences, and for a bit of an “assistance network” for the cruising group. The SICYC hold multiple social events throughout the year and across Australia, with last year the proceedings from the Rendezvous amounting to over $40,000, which was handed over to the Prostate Cancer Foundation of Australia. Over $82,000 has now been raised for Prostate Cancer Research over the past 4 years. A large number of baby-boomers are yachties, and are over-represented in the prostate cancer scene, so PCFA are the Charity of Choice for SICYC.

The annual Rendezvous of SICYC “Vice Commodores” is occurring at Shag Islet, Gloucester passage, 28 to 31 August 2014. The 2013 Rendezvous was attended by over 180 vessels, and 690 “Vice Commodores”. Bigger than Airlie or Hamilton Race week, with helicopter rides, dancing, singing, music, parties, raffles, and the occasional tall story. The official Rendezvous BBQ only lasts a few hours, as once the tide comes in, the bar needs to be dismantled and hauled off the rocks. Ashore at Montes Reef Resort, Cape Gloucester Resort and Dingo Beach Hotel, the shenanigans continue for 4 days. This years theme is “Parrot Heads and Pirates of the Carribean”. James Buffet music, and sounds of the Carribean will be played by “the Barbary Coasters” and “Montserrat”.

“HANDS ACROSS THE BLUE FOR PROSTATE CANCER”.

On Saturday 30 August, the SICYC fleet will gather in their dinghies in the shallows in front of Montes Reef Resort forming the shape of the Prostate Cancer Foundation of Australia Logo holding hands for Prostate Cancer Research. The entertainment and official ceremony for Hands across the blue will be on the water aboard M.Y Norseman, which is being sponsored and hosted by Coral Sea Marina Resort. Mr Jim Hughes OAM Deputy Chair of the National Board of the Prostate Cancer Foundation of Australia will officiate along with other Regional dignitaries.  The Hon Peter Dutton MP Minister for Health and Sport will also attend the Rendezvous this year.

Become a SICYC Member
www.sicyc.org  is the website to access membership, blogs, sponsors and discounts. For a one-off fee of less than $50, you become a life-time Shagger with blue polo and card. Your membership level is Vice-Commodore, the same as everybody else, and your membership number is 0010 – SICYC is “EXCLUSIVELY – NON EXCLUSIVE”.  All SICYC members also get access to the Coral Sea Marina Resort Loyalty program which provide discount on berthing and marina village services.  Ask the friendly marina staff for more information on this program.  Read more on the SICYC.