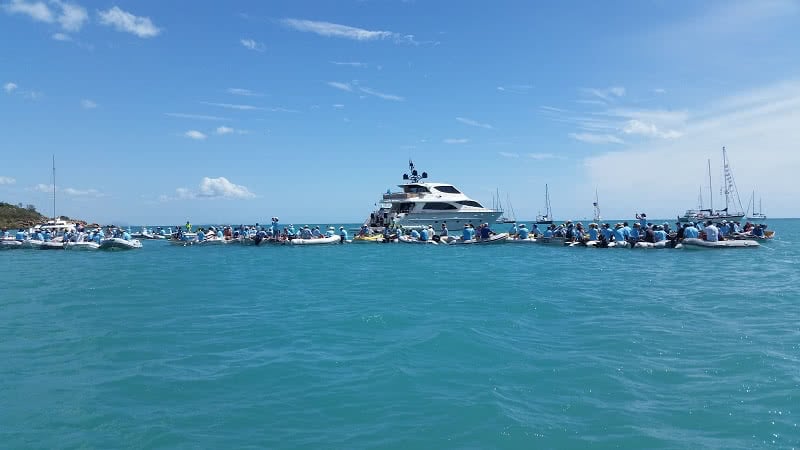 The Shag Islet Cruising Yacht Club rocked the reef on Saturday 30th August with a huge effort to join tenders from 220 visiting yachts into the shape of the Prostate Cancer Foundation of Australia (PCFA) logo, in the inaugural ‘hands across the blue’ event at Hideaway Bay in the Whitsundays.

SICYC founder Ken Thackery and fellow Shaggers came up with the idea to further amplify the event held annually and raise awareness of prostate cancer by challenging other yachting networks across Australia to do the same.

The main sponsor of the event Coral Sea Marina Resort supported the four day event with a special set up on the Saturday including music and speeches from the back of Paul Darrouzet (owner, Coral Sea Marina Resort) motor yacht Norseman.  The special event was attended by both local, state and federal dignitaries and world leaders in the field of prostate cancer research, including Professor Christian Gericke from the Wesley / St Andrew’s Medical Research Institute, leading urologist Dr Les Thompson and Professor Jelle Barentsz from the Netherlands, who has pioneered prostate MRI.

Reported by the Whitsunday Times, Professor Barentsz said women were lucky enough to have had the mammogram for the past 30 years and now, the equivalent for men had the potential to save lives.

Mr Dutton said men were generally more reluctant to visit the doctor than women or to talk about their problems.

“[But] they’ll go away from this event and email their friends and that may just save the life of a cousin or a brother or an uncle,” he said.

“If there’s early detection people can lead a normal life.”

If you would like to check out more excitement from the weekend, jump on our Facebook page for more photos.

Information for this article was provided courtesy of Whitsunday Times.