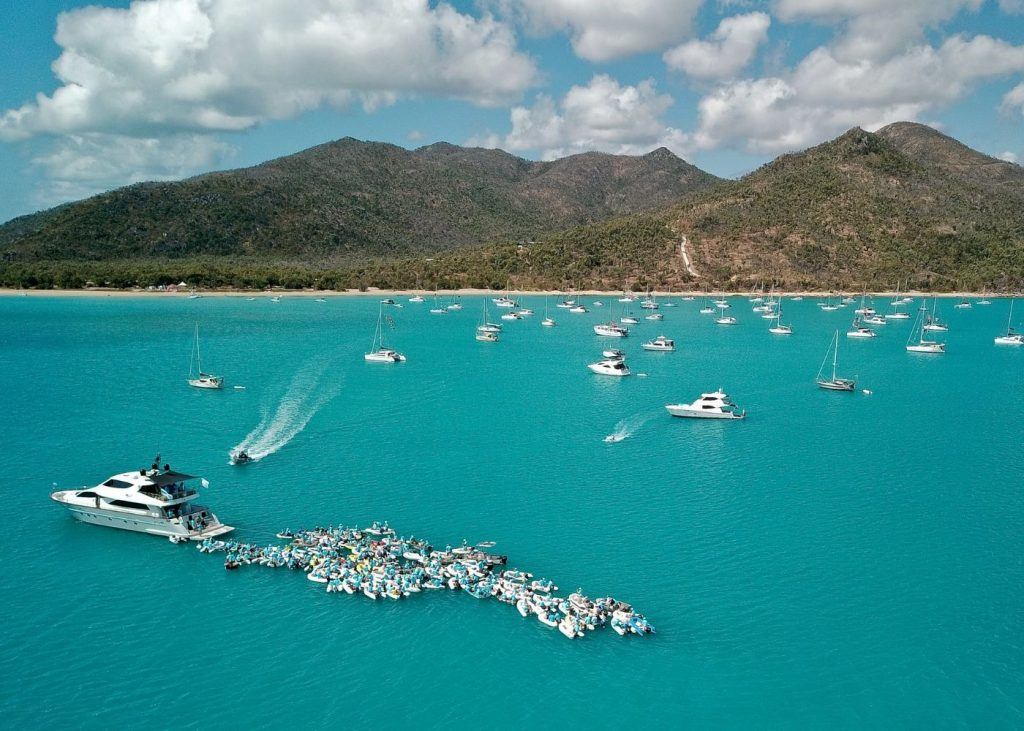 Pack your dancing shoes and prepare for the time of your life – Rio Carnivale is coming to the Whitsundays’ glorious Gloucester Passage from August 22-25.

This year’s theme for the Shag Islet Cruising Yacht Club (SICYC) Rendezvous is bound to up the ante on what is already one of the region’s most sociable events.

The four days of fun and frivolity organised by the world’s most exclusively non-exclusive yacht club centres around the Cape Gloucester Resort.

More than 100 boats and up to 1000 people converge on this beautiful location to party for a good cause.

All funds raised throughout the festivities are donated to the Prostate Cancer Foundation of Australia (PCFA) and contribute to valuable cancer research.

This Saturday, August 24, local and visiting yachties will join ‘hands across the blue’ to raise awareness of prostate cancer.

Winds permitting, they will form the shape of the PCFA logo with their tenders, while listening to live music on the MV Norseman, captained by Coral Sea Marina Resort owner Paul Darrouzet.

A philanthropist with a keen interest in medical research, Mr Darrouzet said just as the sea was a great leveller, cancer didn’t discriminate.

“That’s why this is such an important initiative and the reason I’ve supported the SICYC for seven years,” he said.

“I was on the board of the Wesley Medical Research Institute and a large part of their work was about prostate cancer research – my best friend had surgery as a consequence of some of that research and it saved his life.”

Joining Mr Darrouzet in welcoming everyone aboard the MV Norseman after ‘hands across the blue’ will be Gold Coast City Marina CEO, Trent Gay.

Mr Gay said he and his team were looking forward to heading north for the event and excited to mingle with SICYC ‘Vice Commodores’ while enjoying the Rio Carnivale theme.

“There’s no other Rendezvous quite like this on the water – it’s a fantastic cruising network for yachties enjoying the beautiful Whitsundays whilst supporting a great cause,” he said.

SICYC founder Ken Thackeray said it was thanks to the support of partners like these that the club and Rendezvous had grown so dramatically over the years.

“SICYC is a family and it’s inspiring to see what it’s become,” he said.

“The Whitsundays is well known as the sailing capital of Australia,” she said.

“We host everything from world-class regattas like Airlie Beach and Hamilton Island race weeks, to the Clipper Round the World Yacht Race, so having a social sailing event like the SICYC Rendezvous is a great addition to the mix and a wonderful showcase for our mainland coast at Cape Gloucester.”

Just offshore from Cape Gloucester is tiny Shag Islet after which the SICYC is named, celebrated with its own party this Saturday.

The main event is the Rio Carnivale Party at the Cape Gloucester Resort on Saturday, followed by a Pirate Party on Sunday, August 25.