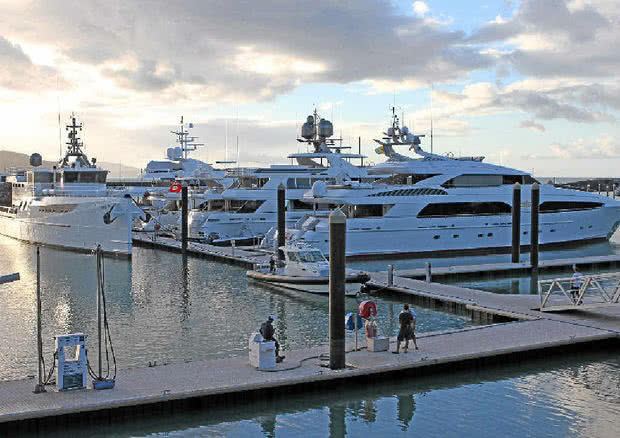 SUPERYACHT regulation, which once had a frustrated Giorgio Armani cut his trip to the Whitsundays short, is one step closer to an overhaul.

The State Government has funded a $20,000 economic impact study to find out just how much a visit from one of the luxury cruisers would boost a local economy.

It was a move Coral Sea Marina Resort general manager Luke McCaul welcomed, believing it would show a single crew spent $20,000-$40,000 in town in a week.

That far exceeded the boost from regular domestic tourists, who would spend an average of $1600 a week.

He believed this data would give the industry leverage to lobby for changes to strict regulations, which has frustrated celebrities like Italian fashion designer Giorgio Armani and the Crown Prince of Dubai so much they cut short trips to the Whitsunday.

Despite having the largest reef in the world, Australia attracts less than 2% of the world’s 6000 superyachts while New Zealand, which has removed a lot of regulation, has a billion dollar industry.

The first was a tax that demanded 10% on the hull value for any international superyacht to operate commercially in Australian waters.

Mr McCaul explained that meant if a $30m yacht arrived, it would have to pay $3m in tax.

The tax had originally been implemented to protect Australian operators, but he said the international boats attracted a much different demographic to the local yachts.

Secondly, superyachts longer than 35m were not allowed within 1500m of any beach, reef or island, meaning tourists couldn’t see places like Whitehaven Beach that first inspired them to visit the region.

He said this restriction had been implemented 20 years ago as part of the Whitsunday Plan of Management, in order to protect the reef from cruise ships and cargo liners.

However he said there had been some negotiations on this recently, and was hopeful another 20 anchorages may be permitted throughout the region within a year.

The captain of La Bella Vita, a 31.5m superyacht based at Abell Point, Glenn McHenry pointed out that while disappointed guests on superyachts kept at a distance, smaller tourist boats landed at Whitehaven Beach every day with up to 200 tourists.

“The impact of that is far greater,” he said.

He also said the larger superyachts that pulled in beside him could spend up to $100,000 a month on provisions.

Opening up accessibility and attracting more of the yachts to the region could inject millions of dollars a year to the local economy, he believed.

Flower Hut owner Janelle Casey often provided flowers to the superyachts and said she was lucky to have them as customers, despite times she’d been called to arrange flowers on a superyacht at midnight, in time for new guests to arrive at 3am.

“They always come and buy flowers, food and alcohol,” she said.

“It would absolutely be good to see the industry grow.”