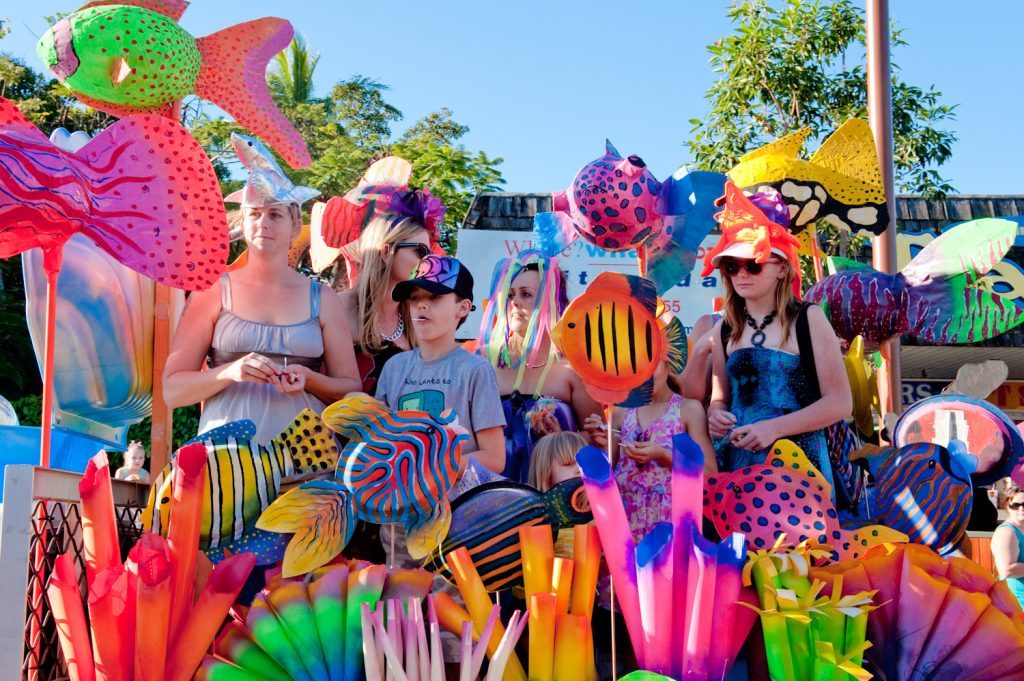 For 18 years the Whitsunday Reef Festival has brought joy to the community of Airlie Beach. For four days each year it has attracted visitors to the Whitsundays and given locals cause to celebrate what it means to live in the region at the heart of the Great Barrier Reef.

Now, in its 19th year, the festival is set to take a giant leap. From the end of this month it will no longer be known as the Whitsunday Reef Festival – instead taking on a new identity and strengthening the ties to its world-famous namesake.

Coming of age in a rebrand to the ‘Great Barrier Reef Festival’ has been a long-held dream for event chairwoman Margie Murphy and her committee.

“We needed to take it to the next level – we’re going to be 20 years old in 2020 and it’s time we brought a whole new, wider focus to the festival,” Ms Murphy said.

For a not-for-profit festival that relies heavily on sponsors and business partnerships to survive, taking the rebrand from a dream to reality was always going to be a nerve-wracking step. First Ms Murphy and her core committee applied for a Whitsunday Regional Council Special Projects grant.

Next they began the search for the creative genius that could bring the brand identity to life. Kicking off a good news trifecta, Council approved more than $5,800 in funding for the project. Whitsunday Mayor Andrew Willcox said Council were keen to support what would undoubtedly be a successful rebranding of an iconic event for the Whitsundays. “The event committee are passionate in growing the event both organically locally and on a national and international scale,” he said. “The Great Barrier Reef is one of the seven wonders of the natural world so to leverage from that brand globally is a no-brainer and I applaud this initiative of the committee.”

Notwithstanding Council’s considerable contribution, there was still a shortfall to find, but at this point Brisbane-based creative agency Nick Did This stepped in. Undeterred by the lack of finances, this band of branding professionals who have delivered projects with clients such as the Toowoomba Carnival of Flowers, Cape Hillsborough, Mackay Region, Tourism and Events Queensland and the Whitsundays’ Coral Sea Marina Resort, embraced the project.

Company Director Nick Pritchard said the hook had been the chance to work with another organisation that meant so much to the local community. “Seventy percent of the festival’s attendees to date have been locals so we’re not taking this rebrand lightly,” he said. “We’re honoured to be a part of taking the festival into the next chapter and are excited to help make it the best it can be for the local community and visitors alike.”

Last but not least, is the injection of funding from Tourism and Events Queensland’s Destination Events Program, which will ensure the new-look festival is marketed to an audience well beyond the Whitsundays’ shores.

Tourism Whitsundays Chief Executive Officer Tash Wheeler, whose organisation also provides vital support, said this would be a turning point for the festival from a growth perspective. “We are excited by the potential this rebrand will create for the region and look forward to working with the festival team on spreading the good news to a wider national audience,” she said. “Geographically and spiritually the Whitsundays is already the heart of the Great Barrier Reef and this is going to be another avenue through which we can get that message out.”

Ms Murphy said she was incredibly grateful to everyone backing the rebrand, and she invited the local community to come along for the ride. “We sincerely hope everyone will jump on board in our quest to make this a nationally and internationally recognised event,” she said.

The rebrand process is now underway, with the new look reveal anticipated at the end of the month.The festival will retain its popular four-day format of fireworks, street parades, live entertainment, comedy, family fun days and more, while also incorporating new premium reef-themed products and events.