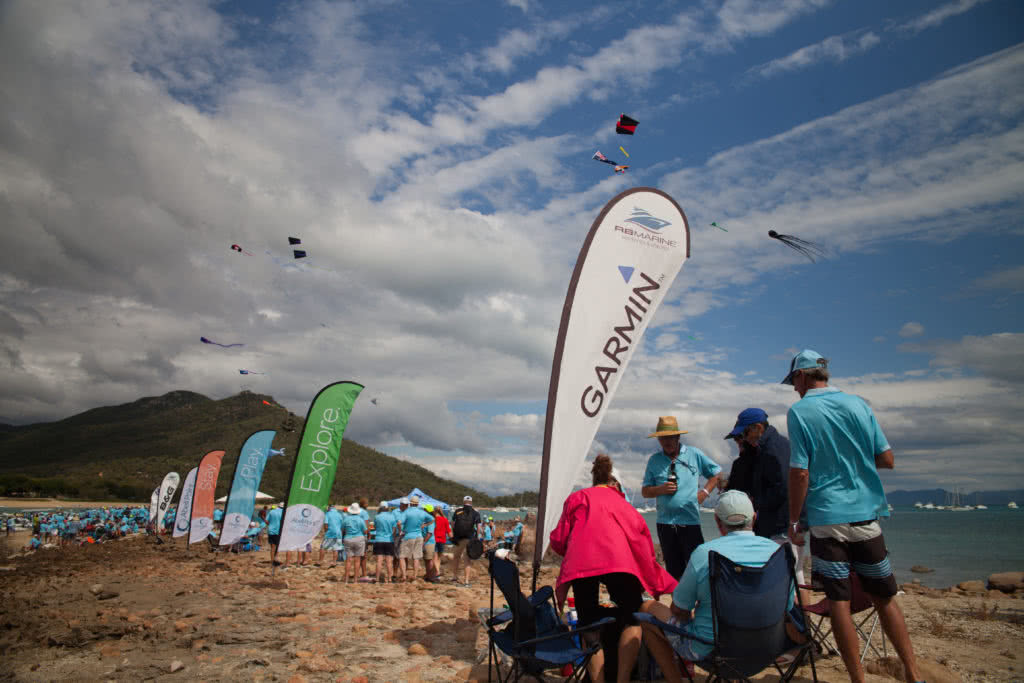 With record attendance, the annual Whitsunday rendezvous of the Shag Islet Cruising Yacht Club (SICYC) continues to grow from strength to strength and cement its status as a major event in the annual cruising calendar. Set in the stunning waters of the Whitsunday Islands, the 2016 rendezvous saw over 200 yachts moored in the Gloucester passage, with the overall attendance over the weekend being the largest to date.

Co-founder of the SICYC Ken Thackeray confirms, 350 members joined together for the meet and greet on Thursday evening, with over 450 attending the Shag Islet party on Friday afternoon. For the iconic ‘Hands Across the Blue’ to raise awareness for the Prostate Cancer Foundation of Australia (PCFA), 156 dinghies registered to participate with over 400 members holding ‘hands across the blue’ to form the PCFA logo in the backdrop of the azure waters of the passage. With on-water entertainment provided by major sponsor Coral Sea Marina Resort and distinguished guests in attendance, the event was a resounding success according to Mr Thackeray and his team of dedicated volunteers.

With a record number of yachts and members attending this year, co-founder Ken Thackeray said of this year’s event “It is magnificent to see the same faces year after year. Coming from all corners of the country and the world, the rendezvous has become a place for the Vice Commodores of the SICYC to meet, exchange cruising stories and enjoy a weekend of activities with like-minded people”.

The guest of honor was Distinguished Professor Judith Clements, who is a prominent prostate cancer research fellow and the Queensland Chair of the PCFA. Professor Clements spoke of prostate cancer as a disease that affects all ages, with an increasing younger demographic being diagnosed each year and explained the research that is being undertaken to update the testing and diagnosis procedures.

With over $103,000 raised over the weekend to be donated to the PCFA, Ms Clements expressed her extreme gratitude in front of the 400 strong crowd for the dedication of the SICYC members and their continued support prostate can research and awareness.

Mr Thackery confirmed that the next major event for the SICYC will be the 2017 rendezvous, which will take place the last weekend in August, as tradition dictates. The SICYC currently has over 5000 members, in 14 countries worldwide, with its primary aim being to develop and foster a social cruising network like-minded boaties.

Every SICYC member is a ‘Vice Commodore’ of a nautical location and are lifetime members, to become a member of SICYC costs $60 including a polo and membership card