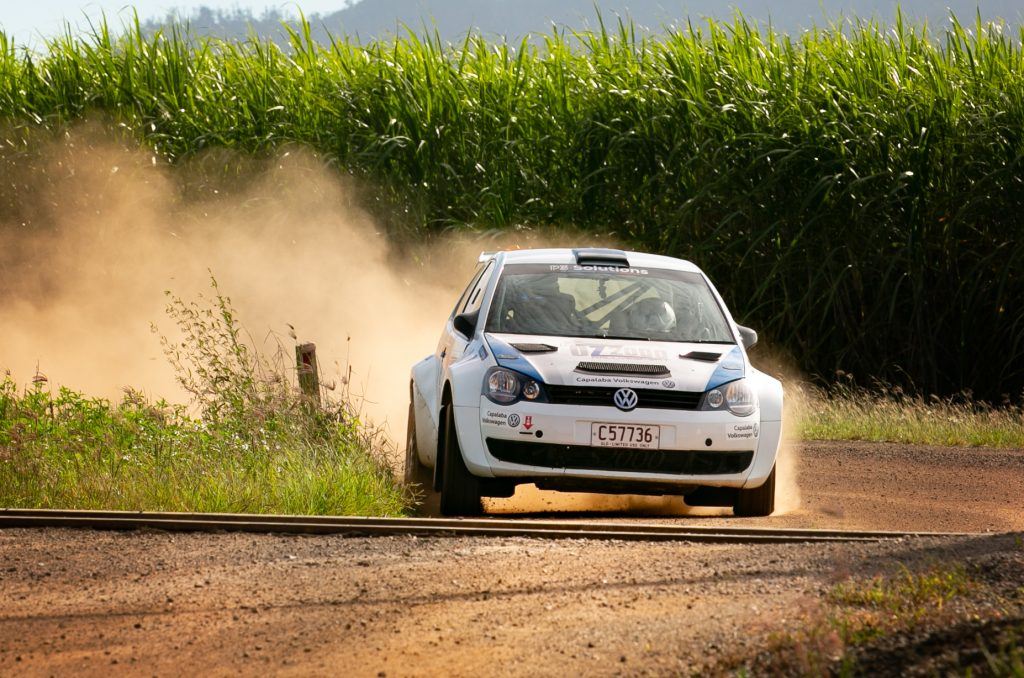 Marius Swart and Alan Stean have taken out the Rally Whitsundays during the first round of the P3 Queensland Rally Championships held over the Whitsundays Festival of Motoring from May 3-5.

The pair took the first place title in the highly competitive race, navigating across 120kms of private and public land in their VW Polo S2000 (car 3).

The race saw impressive competitors from all over North & South East Queensland but first place time was recorded at 43.07, making for an impressive win in front of an enthusiastic crowd.

Second place went to 2018 junior champions, brothers Brayden and Blake Wilson in their White Mitsubishi Evo 6 (car 13) who made a lasting impression. The brothers scored the fastest stage time and Blake also achieved the fastest junior co-driver for the entire Rally Whitsunday race.

Third place went to Craig Aggio and Megan Benson in their classic Toyota KE30 Corolla (Steerfast). A bumpy start for the competitors saw them come through during the second half of the race.

But perhaps the most impressive was fourth place competitors Melinda Bergmann and Larisa Biggar in their Mitsubishi Evo 9 (car 5) who were sponsored by Zonta Club Whitsundays and also proud Whitsunday Festival of Motoring Volunteers.

Some competitors started the Whitsunday Rally making remarkable first impressions within the top 10, but the real winners were perhaps the drivers that overcame adversity during the last stages of the course. We even saw Ross Dunkerton compete who has accumulated an impressive list of 18 Motorsport Titles and an amazing 114 rally wins. Ross is the only Australian to ever hold an international “A” seeding in rallying placing him in the top 15 drivers in the world when he retired in 1994.

First place winner Alan Stean said it was important to support the massive effort involved to stage this inaugural event and to enjoy the wonderful scenery of North Queensland.

“The officials were very encouraging, the weather was great, the venues were excellent and the stages challenging,” he said.

“In all, we are happy with the great result, congratulations Rally Whitsundays, we will be to your beautiful region again no doubt.”

The Rally Whitsundays formed an integral part of the Whitsundays Festival of Motoring, which kicked off on May 3 in Airlie Beach before heading to Bowen on Saturday to host one of the stages for specatators to watch the big race.

Over 2500 rally enthusiasts, locals and visitors took to the streets and enjoyed an array of festival activities across, Airlie, Bowen and Proserpine over the festival weekend.

The inaugural event provided and adventure in paradise and many memorable moments for crews and spectators amongst a tropical landscape.

“Having events such as Festival of Motoring in the Whitsundays are so important for not only our community spirit, but they also have a huge economic benefit to our local businesses,” Tash said.

The community well and truly got behind the festival showing up to each of the events and gathering at the Bowen Festival to make and entire day out of the Rally Whitsundays.

“The Whitsunday Sporting Car Club is extremely proud to be the host of the inaugural Rally Whitsunday 2019 event, we welcomed 31 competitors to experience the amazing Whitsunday roads. From fast flowing roads to a spectacular special stages around the Bowen foreshore that pleased the large crowds.

The event was hailed as an overwhelming  success by all competitors and the community. The community loved the excitement! ” Ross said.