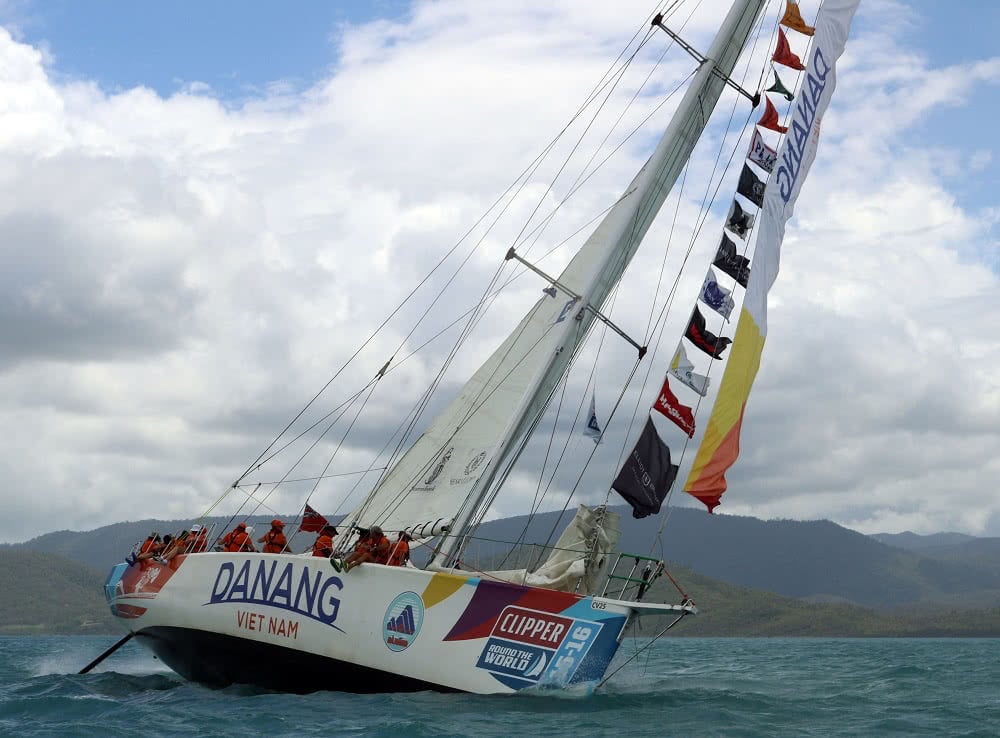 The Clipper 2015-16 Round the World Yacht Race bid a fond farewell to Australia today as the seventh race of its 14-stage global series, The Da Nang New Discovery of Asia Race, starts for Vietnam.

The 4,310 nautical mile race will officially get underway with a Le Mans start, estimated around midday local (0200 UTC) tomorrow,  Tuesday 19 January, 100 nautical miles away in the Coral Sea, where the twelve-strong Clipper 70 fleet is currently heading to.

Ahead of leaving her homeland for the final time in this race, Australian Skipper Wendy Tuck, who leads the seventh place Da Nang – Viet Nam team and used to live in Airlie Beach a few years ago, said: “It has been the greatest time being back racing in Australia and we enjoyed our best race results yet here, but the excitement continues as everyone has been looking forward to arriving in Da Nang since we left London four months ago.

“We’ve had such incredible support all over Australia and here was no different. It felt as if the community of Airlie Beach really took us into their hearts and made us feel so welcome. Everywhere we went people were happy to see us and were interested in hearing about the race. It’s been a fabulous stopover.”

At 40,000 miles in length, the Clipper Race takes eleven months to complete, making it the world’s longest ocean adventure. It is the only event of its kind that trains amateur sailors to race around the world. 40 per cent of Clipper Race crew have never sailed before they start their extensive training

“The entire community here in Airlie Beach has got really behind the race and we’ll certainly be following the teams more closely as they continue to Da Nang and around the world. We wish all the crew and Skippers the best and hope to welcome them back to Airlie Beach for another visit in the not so distant future, now that they’ve seen how beautiful the Whitsundays is.”

Ahead of starting the race, which will take three to four weeks to complete, the Da Nang – Viet Nam team led the fleet out as it performed a parade of sail out of the picturesque Whitsunday Islands, surrounded by dozens of local spectator boats who joined them on the water to wish them well in their next challenge.

With a tough beat north into prevailing winds as they depart and head up the Queensland coast and the wildness of the Northern Territories, the Clipper Race fleet will then cross the Equator for the second time since leaving London.

This race will test the navigation skills of the teams as they try to work out the best route through the remote communities in Papua New Guinea and into the Pacific Ocean for the first time.

On the approach to Vietnam, the fleet will take advantage of the north east monsoon winds. Spinnakers will be hoisted as the teams charge towards an impressive, highly anticipated welcome in Da Nang where a series of celebrations and festivals are planned for the crew.

The first-time Vietnam has been a Host Port and Team Sponsor of the Clipper Race, the city of Da Nang is using the partnership as an opportunity to boost trade, investment and tourism along with enhanced social and diplomatic relations.

As a fast-growing, tourism friendly city gifted by nature with a beautiful river, mountains and beaches, Da Nang is striving to become a world destination for tourists. It was named as Number One in the Tripadvisor 2015 Top 10 World’s Destinations on the Rise.

The departure to Da Nang marks the end of the All-Australian Leg, which started in Albany in November and included the challenging Rolex Sydney Hobart Yacht Race. Since leaving London in August, the Clipper Race fleet has completed 18,000 of its 40,000 nautical mile circumnavigation.

The race to Da Nang is estimated to take around 31 days, with the arrival window into Da Nang set for 17-21 February.

To download official team photos and video, which will be updated throughout arrivals, please visit:
www.clipperroundtheworld.com/mediaportal.

Under the backdrop of the Marble Mountains and surrounded by breathtaking beaches, Da Nang is a vibrant city shaping itself as a centre of culture, tourism and events. Its success to date has earned it the title of Tripadvisor 2015 Top Destination on the Rise.

The third largest city in Vietnam, Da Nang, is rich in history and culture. Immersed in legendary folklore with tales of dragons and fairies, Da Nang is affectionately nicknamed “the yoke” by locals because it connects two sides of the country.

As a first time Clipper Race Team Sponsor and Host Port, Da Nang has the opportunity to introduce itself to the international community through this global sports event. It not only promotes Da Nang, but also the whole of Vietnam, its people and culture. The city’s involvement in the race expresses the nation’s desire to connect and interact with the world in a spirit of warmth and peace, opening up trade opportunities and enhancing social development.

The Da Nang – Viet Nam team tasted victory in the Clipper 2015-16 Race when Skipper Wendy Tuck and her crew won Race 5, the Clipper division of the iconic Rolex Sydney Hobart Yacht Race (RSHYR). Wendy, 50, is the first Australian woman to Skipper a Clipper Race yacht and was also awarded the prize in the RSHYR for being the first female Skipper across the finish line in a fleet of 108 boats.

The Da Nang New Discovery of Asia Race starts in Australia on 18 January and the fleet is expected to arrive in Da Nang between between 17 – 21 February 2016 as part of the Asia-Pacific leg. The Clipper Race fleet and more than 200 crew will stay in the city until they are due to depart on 27 February.
Clipper Round the World Yacht Race
The Clipper Round the World Yacht Race is the world’s longest ocean adventure and is also regarded as one of the toughest endurance challenges on the planet. At 40,000 nautical miles long and taking almost a year to complete, it consists of twelve teams competing against each other on the world’s largest matched fleet of 70-foot ocean racing yachts.

The Clipper Race was established in 1996 by Sir Robin Knox-Johnston, the first person to sail solo non-stop around the world in 1968-69. His aim was to allow anyone, regardless of previous sailing experience, the chance to embrace the thrill of ocean racing; it is the only event of its kind for amateur sailors. Around 40 per cent of crew are novices and have never sailed before starting a comprehensive training programme ahead of their adventure.

This unique challenge brings together everyone from chief executives to taxi drivers, nurses and firefighters, farmers, airline pilots and students, from age 18 upwards, to take on Mother Nature’s toughest conditions. There is no upper age limit, the oldest competitor to date is 74.

Whether they choose to take on  the whole circumnavigation or compete in one or more of eight individual legs, all our crew achieve something remarkable as they conquer some of the world’s most challenging oceans.

The overall route is split into a series of global races and a maximum 12 points going to first place ascending to 1 point for twelfth place. The team with the highest cumulative points at the end of the final race wins the series, and the Clipper Race trophy.

The Clipper 2015-16 Race started from St Katharine Docks, London on 30 August 2015 and will be the event’s tenth edition. Over 690 people from more than 40 different countries will take part, and over 3,000 novice sailors have been transformed into ocean racers throughout Clipper Race history so far.
For more information, go to www.clipperroundtheworld.com.