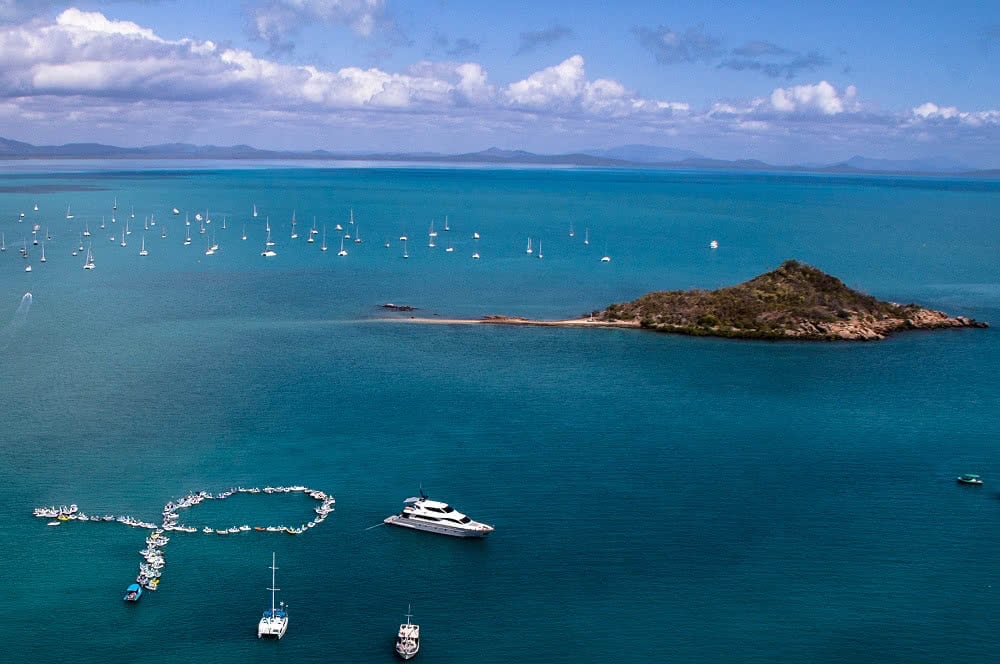 Last weekend on Saturday 29 August, 180 boats, Power and Sail joined together in the Shag Islet Cruising Yacht Club (SICYC) Rendezvous in Gloucester Passage, featuring the ‘Hands Across the Blue’ for Prostate Cancer.

Hosted in the stunning turquoise waters of the Whitsundays, yachties from around the world gathered in their dinghies in the shallows just off the beach from Montes Reef Resort holding “hands across the Blue” in the shape of the Prostate Cancer of Australia (PCFA) logo to drive awareness of the cancer that takes lives of more than 3,000 Australians per year.

The guest of honor was Distinguished Professor Judith Clements, who is a prominent prostate cancer researcher and the Queensland Chair of the PCFA . Professor Clements spoke of the cancer that is a disease and affects all ages with an increasing younger demographic being diagnosed each year and explained the research that is being undertaken to update the testing and diagnosis procedures.

Deputy Major of Whitsundays Andrew Willlcox described Saturday’s Shag Islet Cruising Yacht Club as the best event he’d attended in his position with the council saying ‘Here in the Whitsundays we have good days and we have great days and today is a great day’.

About 700 people agreed with him, flocking to the event in the Gloucester Passage that over the course of its three days raised a record $82,000 for Prostate cancer awareness and research.  To date the total amount raised by SICYC is now $252,000.

Professor Clements and founder of SICYC Ken Thackeray said their goal now was to spread the message beyond the Whitsundays, with the hope that on the last Saturday of August each year, other boating, fishing and surf lifesaving clubs might hold hands across the blue ahead of Prostate Cancer month in Septermber.

SICYC is a not for profit association and now has over 4,000 members from 15 nations with the primary aim to create and maintain a social cruising network for cruising yachties. Every member is a Vice Commodore of a nautical location and are lifetime members, to become a member of SICYC costs $60 including a polo and membership card.

For further information, join and support a great cause at sicyc.com.au