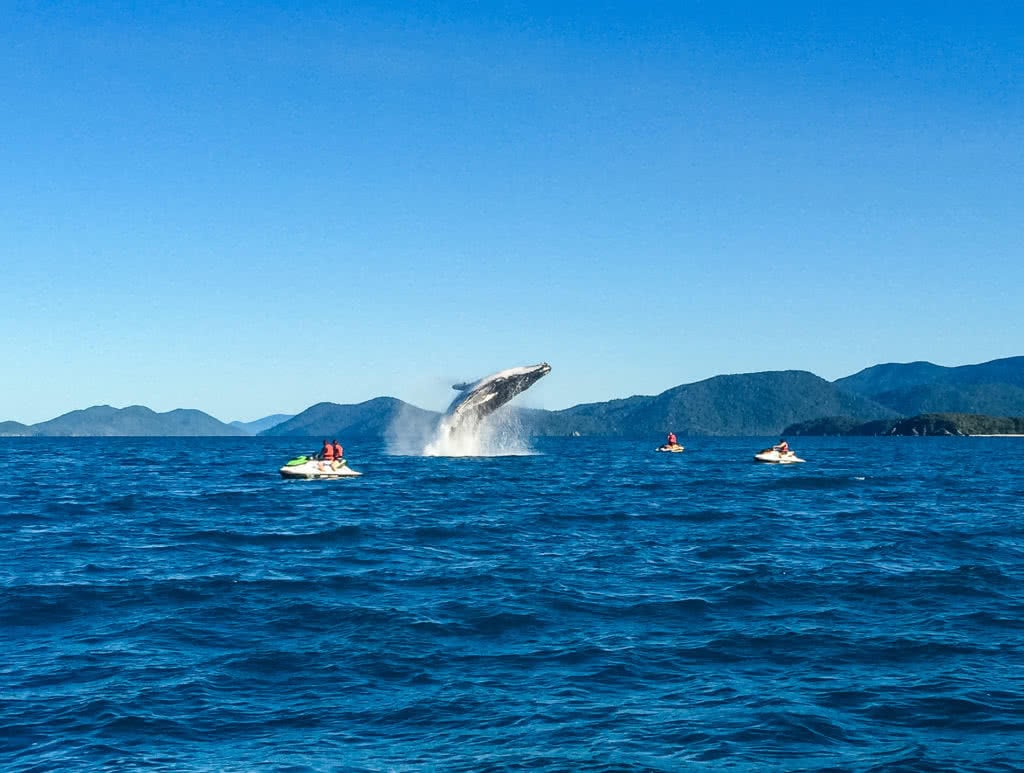 A day of action packed jet skiing on the Whitsunday waters is always one to remember, but last Friday 7th August, was one that will never be forgotten for guests on Whitsunday Jetski Tours’ Daydream Extreme tour. In an epic show and a once in a lifetime sight, a female Humpback whale surprised the jet ski tour group with a spectacular display as she breached out of the water in front of them.

Whitsunday Jetski Tours’ sister company, Daydream Island Watersports, had radioed through to the tour guides on the afternoon Daydream Extreme tour to let them know that there were whales frolicking at the south end of Daydream Island, with regular sightings a common occurrence over the past few weeks.

When approaching the passage, the tour guides shut down the jetskis and stopped a safe distance away to watch the whales before they disappeared and dove down into the water. Excited at what they had seen and assuming that the whales had finished their display, the mother Humpback whale then suddenly and spectacularly jumped out of the water in front of the group and tour guide, Darren Sheil.

“Although it all happened so quickly and took us by surprise when it breached close to our jetskis, it was just such an amazing, magical sight. Our guests were thrilled beyond belief and in awe at what had happened, and for me it was will be one of the highlights of my career on the ocean,” said Mr Sheil.

The images were captured by another Whitsunday Jetski Tours’ tour guide, Broden Warne, who, in the right place at the right time, captured the shot of the decade as the whale majestically breached high out of the water near the group.

“I just can’t stop thinking about this awesome, once in a lifetime experience and I can’t believe I caught the whole moment,” said Mr Warne.

Within 24 hours of posting an image of the whale spectacular on Whitsunday Jetski Tours’ Facebook page, there were nearly 1500 likes and 190 shares, and guests were sharing their experiences on the company’s TripAdvisor page with comments including “breathtaking’, “unbelievable” and “priceless”.