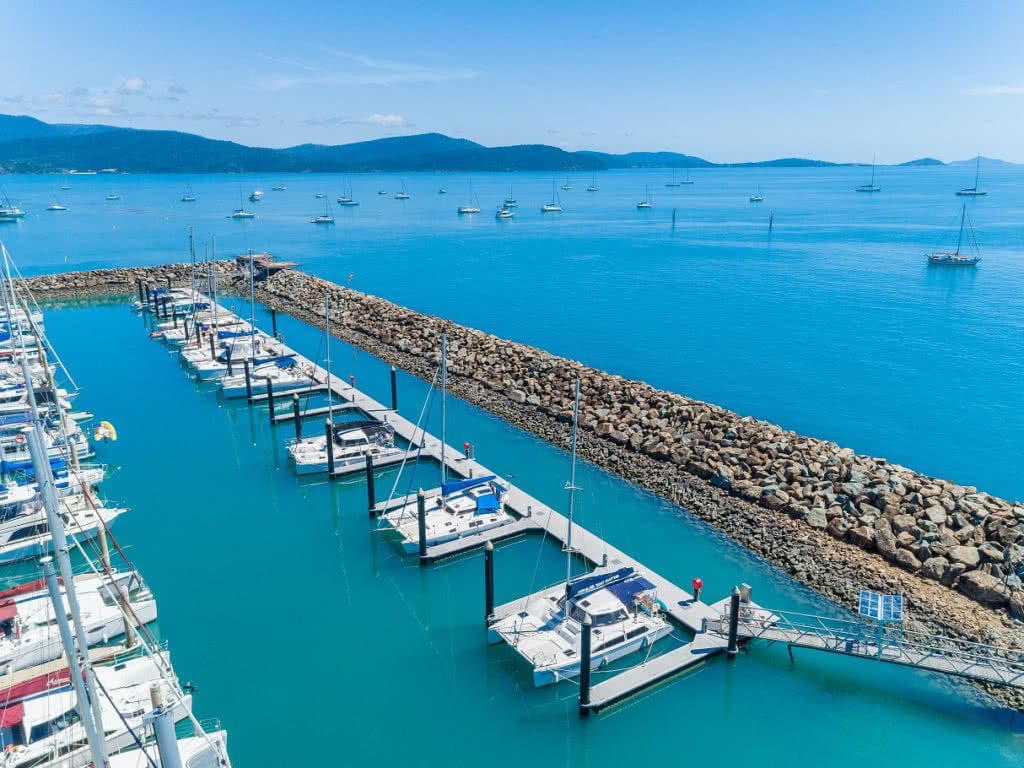 This week marks the completion of the on-water restoration project at Coral Sea Marina Resort in the wake of the Tropical Cyclone Debbie. In the immediate aftermath, 20% of the on-water berthing at Abell Point was damage amounting to approximately 120 berths in this 507-wet berth marina. In a coordinated effort between Superior Jetties, CGU Insurance and Oceanic Marine Risk, the restoration works commenced 3 April, a mere five days after the cyclone passed over the Whitsundays.

In the initial stages of the project a team of volunteers from BIA (Boating Industry Australia) Queensland, arrived on-site to assist with the make-safe stage of the restoration project. Experienced marine trades personnel from marina managers, to pontoon specialists arrived on-site, including representatives from Superior Jetties to offer support and assist with commencing repair works.

Within days a temporary walkway for L Arm and the marina’s fuel dock was fitted, and by week six the walkway had been replaced for new.

With considerable coordination between the Superior Jetties and marina team, commercial operators and private vessels were relocated to the south marina for the pontoon replacement works to commence. Coral Sea Marina Resort is the busiest commercial marina in the region and with the Whitsunday region being so reliant on the tourism sector, a priority for the project was to ensure minimal disruption to the marina’s on-water tourism operations whilst the repair works commenced.

Superior Jetties, Project Manager, Ryan Hogan remarked of the project, “This project has been the culmination of our team down south working some very long hours to produce a fantastic product; and outstanding subcontractors who went above and beyond to get the marina operational again. It’s been a real pleasure to work in North Queensland again and with a client that’s dedicated to running a truly world class marina. This has definitely been the best project team I’ve ever had the pleasure of working with.”

From initial damage assessment, to temporary repairs around the marina, from demolition of debris to piling works and the manufacture/ transportation and installation of the new arms – H/ J/ K/ F/ G and A – the team coordinated by Superior Jetties worked tirelessly to restore the marina to 100% capacity. Mr Hogan goes on to give a special mention to services provided throughout the project by Orca Marine Services, Proserpine Electrical, Whitsunday Drainage Contractors and Pacific Marine Group.

With a busy cruising season scheduled, the launch of a new Abell Point Flight Collection from the marina’s heli-pads and the opening of their floating customer lounge Ocean Club, the timing of the project completion was essential to ensure business as usual. To round off a challenging year and give cause for celebration, Coral Sea Marina Resort took out the coveted Marina of the Year Award at the Marine17 conference in August.

Luke McCaul, General Manager, Coral Sea Marina Resort explains “To have the pontoons replaced and operational in time for our cruising season was essential for the marina, but also for the region. The Whitsundays has bounced back from this weather event in record time and the natural environment around the islands is following suit.” Mr McCaul goes on to say “The start of the year was a challenging time for the marina team including our valued operators and tenants, but the future is looking bright and the completion of the project on time and on budget is a credit to the hard work and commitment of the team, our contractors and our relationship with our insurers.”