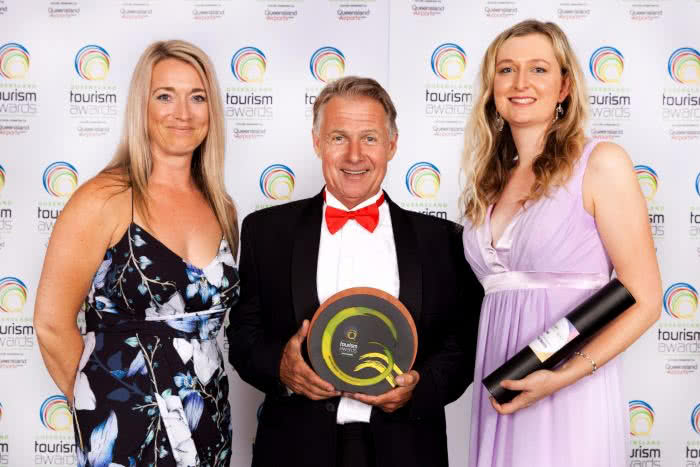 The 2017 Queensland Tourism Awards held this weekend saw Coral Sea Marina Resort awarded gold for Major Tourist Attraction, above some very well-known Queensland operators. The final award category of the night was announced with Australia Zoo winning bronze, Hartley’s Crocodile Adventures winning silver and Coral Sea Marina Resort receiving the gold. This is the first year the Whitsundays award-winning marina has entered the Queensland Tourism Awards having previously won this category at regional level in 2016 and this year again in 2017.

The award was proudly received by marina owner Paul Darrouzet in front of a crowd of 930 tourism industry representatives at the Brisbane Convention Centre. In his acceptance speech, Mr Darrouzet paid tribute to the great achievements of his team since taking ownership of the marina in 2013 and their focus on creating a destination marina in the heart of the best cruising grounds in Australia.

As with many of the other winning Whitsunday operator in their acceptance speeches, Mr Darrouzet touched on the resilience of the tourism industry in the Whitsundays who have spent a challenging year restoring their tourism operations in aftermath of Tropical Cyclone Debbie.

It was a night of great achievements for the marina’s tourism operators, with three of them taking out the gold award in their respective categories – Ocean Rafting (Major Tour & Transport Operator), Island Jet Boating (New Business) and Cumberland Charter Yachts (Unique Accommodation). Both Red Cat Adventures (Adventure Tourism) and Whitsunday Escape (Unique Accommodation) were awarded Silver in their respective categories, taking the marina’s awards tally to 10 of the total 14 Whitsunday awards won throughout the evening.

The Whitsunday region was certainly well represented with over 50 Whitsunday operators attending the gala event. Queensland Tourism Industry Council chief executive Daniel Gschwind said operators in the Whitsundays had been rewarded for their resilience in the face of enormous challenges. “The Queensland tourism industry is tough, it’s resilient and that has been wonderfully demonstrated in the Whitsundays,” he said.

The gold award winners now automatically qualify as finalists in the Australian Tourism Awards to be hosted in Perth in February 2018.

2017 has been a year of noteworthy achievements for Abell Point, after being awarded Marina of the Year, Superyacht Business of the Year and now Major Tourist Attraction. With 507 wet berths, 85 commercial on-water tourist operators and over 300,000 visitors to the marina on an annual basis, Coral Sea Marina Resort is the largest commercial marina of its kind in Queensland.