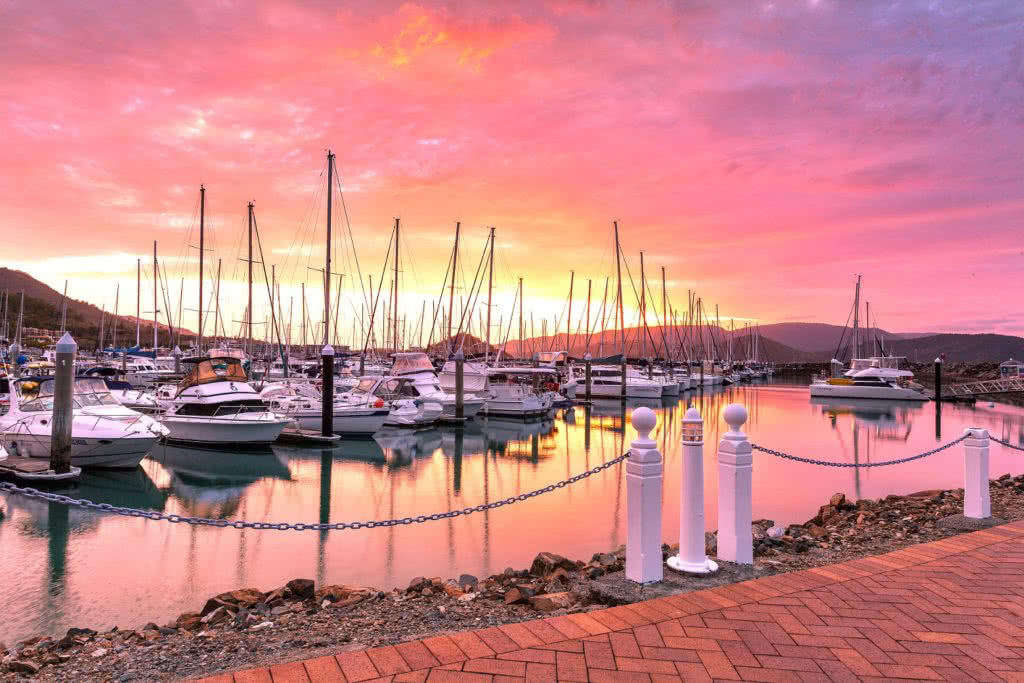 From experiencing one of the worst weather events ever to hit the Whitsundays, to the achievement of prestigious awards and accolades, it is safe to say 2017 has been a roller coaster for Coral Sea Marina Resort.

The year commenced with a focus on continuous improvement in the form of upgrades to private and public amenities, the dredging and parkway projects in full swing and progress steadily being made on Ocean Club for the proposed 1 April launch.

In February, the marina purchased Barcelona Restaurant in the south village and whilst operating the restaurant with some minor changes in the interim, plans were drafted for a complete restaurant renovation and rebrand.

On 28 March, Tropical Cyclone Debbie hit the Whitsunday coast and the destruction to the marina infrastructure, the Whitsunday islands and the surrounding region was vast. With 20% of our on-water infrastructure damaged, as well as no power or water to the region, the aftermath proved to be a very challenging time for all concerned. Not to be beaten, the plans for infrastructure restoration were drafted almost immediately and the team from Superior Jetties were on-site within 48 hours.

Throughout April, remedial works had commenced, our operators were back on the water and a sense of normality was back in the marina precinct.

May saw us win Superyacht Business Service Provider of the Year at the ASMEX conference on the Gold Coast. Marina owner, Paul Darrouzet, also won Superyacht Industry Champion in acknowledgement of his time and money invested in improving superyacht facilities at Abell Point and on lobbying for improved access for superyachts in the Whitsundays.

In May we also launched the latest addition to the marina portfolio, Hemingway’s restaurant. Located on the absolute waterfront in the south marina village, Hemingway’s was designed with a coastal chic interior and offers modern Australian cuisine. Celebrity Chef Matt Golinski was in town for the restaurant opening and newly appointed Head Chef, Matt Dixon and his team excelled on opening night and in the weeks following.

June marked the completion of stage one of the restoration project, the replacement of H, J, K arms in the north marina village. The remainder of the project was moving along on time and on budget. To celebrate the start of the cruising season, Abell Point hosted the Cruising Season Launch Party which included a Master Class foodie event, beginners yoga sessions and a sell out long lunch at Hemingway’s.

July saw the launch of our 26m floating customer lounge Ocean Club. With 12 en-suite bathrooms, check in office and reception and an expansive sundeck with marina views, this addition fast became popular with marina guests.

In August, the marina was alive with activity, cruising yachties, superyachts, Airlie Beach Race Week participants and Shaggers coming to town in preparation for the SICYC Rendezvous at the end of the month. The team attended the Marine17 conference in Sydney where we were delighted to be awarded the coveted Marina of the Year 2017/18 award for the first time, as well as Best Innovation by a Marina for our Blue Carpet Treatment initiative. These awards were certainly a huge achievement for the team and testament to all the hard work over the last four years in creating a vibrant destination marina precinct.

A timely completion of the cyclone restoration project was also celebrated in August with the entire project being delivered on time and on budget. Our special thanks to Superior Jetties, Oceanic Marine Risks and CGU for their assistance on this project.

September saw the Abell Point Flight Collection officially launch from our marina helipads in conjunction with aviation partner Helireef. Airport transfers, scenic and private flights are now all available year-round from within the marina precinct. We hosted our annual Reef & Beef Party in September with over 280 marina guests joining us for drinks, food and live music as the sun set on the foreshore.

October started with Abell Point taking out gold in the Major Tourism Attraction category at the Whitsunday Tourism Awards. Another significant milestone for the marina team was our function venue, Lure, also taking out the gold for Specialised Tourism Service on the night. A great achievement for Lure after only 18 months in business.

In November, the team attended the Queensland Tourism Awards in Brisbane to be awarded the gold award again for Major Tourism Attraction. This award now automatically qualifies Abell Point for the Australian Tourism Awards in Perth in February 2018. With six of the marina’s tourism operators taking home an award on the night and 14 awards in total for the Whitsundays, it was certainly proved to the rest of Queensland that the Whitsundays is back in business.

November also saw the arrival of 74m MY Dragonfly, the largest superyacht to ever berth at the marina. Dragonfly glided into her berth with ease and attracted a great deal of attention locally. The captain and crew enjoyed some relaxation, as well as contributing to local charitable and environmental organisations during their time with us.

In December commenced the countdown for the arrival of the Clipper Round the World Yacht Race 2017-18. The fleet arrival will be marked with two wondrous weeks of events in the form of the Whitsunday Clipper Race Carnival.

Our marina Christmas party at Lure saw 180 tenants, operators, staff and suppliers come together for a festive celebration and was a great opportunity to thank everyone for their commitment, hard-work and resilience in 2017.

As we sign off on another successful year, we wish all our customers, tenants, operators, suppliers and industry partners a safe and prosperous 2018.